Tuning electron pathways and giant magnetoresistance in a single-molecule device

The success of information technology would not have been possible without the accelerating miniaturization of electronic devices, which has spurred the exploitation of molecular electronics. The ultimate goal of molecular electronics is to construct electric circuits using single molecules. Single- molecule devices are exciting playgrounds to study quantum transport, to examine fundamental magnetic interactions and quantum many-body phenomena. Controlling precisely the quantum states of single molecules at the interface with substrates, is thus one of the most important and challenging research field in condensed matter physics. During the last two decades, Prof. Hong-Jun Gao's research group at the Institute of Physics, Chinese Academy of Sciences, has been exploring how to control quantum states of single molecules, and achieved a series of world-leading results.

Using scanning tunneling microscope/spectroscopy (STM/STS), they are able to construct nanoscale devices at the single-atom and single-molecule level. They have reported a reversible, erasable, and rewritable nano-recording on a thin film of rotaxane molecules [Phys. Rev. Lett. 84, 1780 (2000); J. Am. Chem. Soc. 127, 15338 (2005); J. Am. Chem. Soc. 129, 2204 (2007)]. These works on single-molecule conductance control, make rotaxane a promising candidate for ultra-high-density data storage. Kondo resonances are a very precise measure of quantum transport through magnetic impurities. In 2007, they found for iron phthalocyanine, the signal of the Kondo resonance depends strongly on the adsorption site of the molecule on a gold surface [Phys. Rev. Lett. 99, 106402 (2007)]. This is the first time that Kondo effect is controlled by adsorption configuration at the single-molecule level. In 2013, they demonstrated that the Kondo resonance of manganese phthalocyanine molecules on a Au(111) substrate can be reversibly switched off and on via a robust route through attachment and detachment of single hydrogen atom to the magnetic core of the molecule. The further demonstration of robust Kondo ON/OFF switching in a molecular array could also be applied as nonvolatile classical information recording and storage at the ultimate molecule limit [Scientific Reports 3, 1210 (2013), with ~100 citations]. In 2015, they revealed an inhomogeneous distribution of Landé g factor inside a single molecule for the first time, by performing “molecular surgery” on a single manganese phthalocyanine molecule [Phys. Rev. Lett. 114, 126601 (2015)]. Furthermore, using a large-area high-quality Graphene as a template, they measured and controlled the interatomic spin interactions in graphene-regulated Mn atomic clusters [Phys. Rev. Lett. 119, 176806 (2017)].

The single-molecule device in this work consists of an FePc molecule attached to a Au(111) surface and an STM tip (Fig. 1). The two metal electrodes (Au and tip) serve as the source and drain. They measured differential conductance (dI/dV) spectra at the Fe center of the molecule at the temperature of 0.4 K. At zero magnetic field, a sharp Kondo resonance is present around the Fermi level, and the Kondo resonance shows dip-to-peak transitions with increasing magnetic fields (Fig. 2). To gain a better understanding of the change of spin states with magnetic fields, they studied the spatial distribution of the Kondo resonance over the FePc molecule by performing spectroscopic mapping near the Fermi level under varying magnetic fields (Fig. 3). At zero or low fields, the Kondo resonance (dip) shows a non-circular spatial distribution, while at high magnetic field the Kondo resonance (peak) is more localized on the molecular center, with a radial symmetry. Density-functional first-principles calculations shows that the low-energy density distribution of the two most relevant d orbitals (dxz/dyz  and dz2） around the Fermi level depends strongly on the orientation of the magnetic moment. Thus, the pathway of single electrons through the orbitals of a magnetic molecule can be tuned at a very low energy by varying the external magnetic field. While at zero field the electron density scattered through the Kondo resonance will be exclusively at the dxz/dyz orbital, it will pass through the dz2） orbital at high field, and a varying part of the density will pass through both orbitals in the intermediate regime. The magnetic reorientation of the Fe center by varying the magnetic field also leads to the tunneling anisotropic magnetoresistance (TAMR), and they demonstrated a tunable TAMR at the single-molecule level, which is up to 93%, adding a new dimension of control to molecular spintronics.

Persistence is the key to success. This achievement cannot be realized without the hard work of many PhD students and the collaborations with the top-level theorists. It took the joint team about 10 years to design and perform the experiment, and to propose and optimize the theoretical models to understand the experimental results. In fact, many other research groups (for example, M. Kawai's group at University of Tokyo) also studied the quantum many-body effect of the same molecular system, and proposed a controversial theoretical mechanism based on their low-field experimental data [Phys. Rev. Lett. 109, 086602 (2012)]. Finally, by measuring the high-field response of the Kondo effect in a carefully designed experiment, Prof. Gao’s team revealed the orbital-selective mechanism that explains very well the intriguing behaviors of the Kondo resonance of the single FePc molecule under magnetic field. 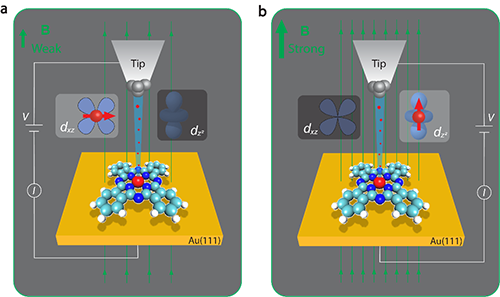 Fig. 1. Schematics of the electron transport process through a single FePc molecule adsorbed on a Au(111) surface at different magnetic fields.

Fig. 2. Evolution of the dI/dV spectra of a single FePc molecule with increasing magnetic field. 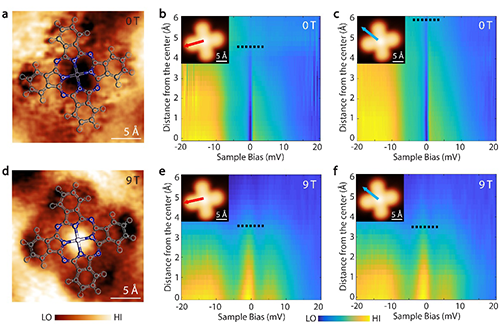 Fig. 3. Spatial distribution of the Kondo resonance at different magnetic fields of a single FePc molecule. 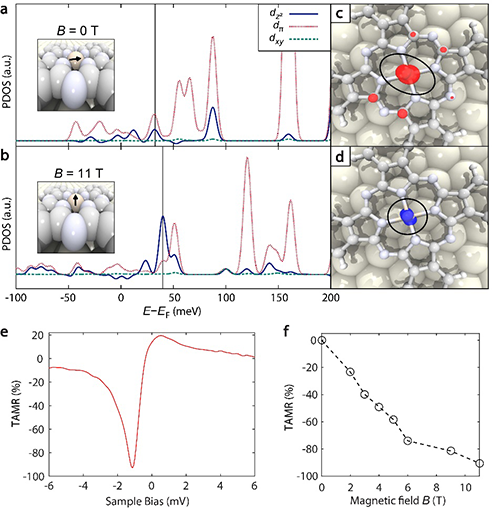